Embrace the Price of Success

Embrace the Price of Success, Because the Price of Failure Is Too High, is a collection of stories and lessons from marketplace veteran and sales and marketing professional, Jay Mincks. These lessons were acquired over decades of serving and servant leadership.

You'll be struck by:
• How viscerally Jay shares his memories.
• How humanity dominates the lessons.
• What it takes to build a national sales organization.
• The raw honesty.
• The ingredient often missing in other books – spirit.

Successful people develop certain traits, both innate and acquired. Not committing to invest in the price of success is choosing to pay the cost of failure.

Being optimistic is a choice and makes life more enjoyable. Optimists focus on what can be, not what is.

The path to success requires both determination and discipline. It’s dedication to the discipline of success that will make it happen.

Faith offers success without strife. Your ability to handle adversity and free yourself to possibility thinking is in direct correlation to the strength of your faith.​ 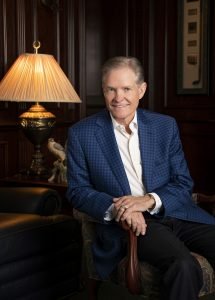 Jay Mincks is the executive vice president of sales and marketing at Insperity. As head of the Company’s growth division, he executes sales goals nationwide through developing innovative selling strategies, launching effective lead generation and cross-selling programs and promoting a solid corporate brand. As a result of his leadership, Insperity has over 65 offices in 28 major markets throughout the U.S.

Jay also oversees the production of special events, such as the award-winning Champions Tour event, the Insperity Invitational™ presented by UnitedHealthcare®, as well as community involvement initiatives across the country. Jay serves as chairman of the Greater Houston Golf Charities and vice president of Somebody Cares America. He also serves on the board of Wheelchairs for Warriors and the executive board of Greater Houston Partnership.

Jay and his wife of over 43 years live in Houston. They have three sons, two daughters-in-law and three grandchildren. He holds a business degree from the University of Houston.

Embrace the Price of Success

Available in hardcover and ebook.
Click book images to purchase.

Jim Nantz, Award-winning sportscaster, CBS Sports
"I'm continuously struck by Jay's boundless ability to succeed at everything he touches - especially leading people. Jay is a testament to the power of hard work, and relationship building, and a moral compass that’s always pointed in the right direction. So now that he’s put in writing what he’s learned, I’m asking, “Who wouldn’t want to read a book by Jay Mincks?” I sure do."
Anthony Carr, National Vice President AEG Division, United Healthcare
"My friend, Jay Mincks, has compiled a lifetime of leadership, experiences and honest reality into his new book, Embrace the Price of Success. Take a few hours from your business schedule and take this trip with Jay. You will benefit, as I have, from this investment of time."
Joe Cleary, President, Harvey Builders
"Embrace the Price of Success is a gift from a legendary servant leader. As you read this book, you'll feel like Jay is speaking directly to you, regardless of where you are on your career journey. Listen, learn and execute your life like Jay teaches."
Ross Astramecki, Senior Vice President of Sales, Insperity
"Over almost 25 years, I've had a front-row seat watching and being mentored by Jay Mincks, as he's share his vision of leadership, integrity, and accountability. By reading Embrace the Price of Success, you can immediately start putting Jay's success principles to work in your life. Trust me – it's worth the investment."
Dan Pastorini, former NFL Quarterback, current business owner
"In my career as an athlete and business owner, I've developed a keen eye and ear for true leadership traits.Don't miss the opportunity to learn from one of the best, my long-time friend, Jay Mincks. Buy and read Embrace the Price of Success. You'll thank me later."